View the Take 5 with Bernard Avallet

Swegon is a member company of the investment group AB Latour. Swegon works in the field of manufacturing and marketing ventilation and air conditioning products and solutions. The firm has an annual turnover of €320 million and employs approximately 1,350 people worldwide.

The company, which originated in Sweden, is a world player in HVAC. SWEGON currently has sales offices in 37 countries, mostly in Europe such as Finland, Belgium, France, Spain or Switzerland. It also has operations in the UAE. The company’s partners are located in other European countries.

Swegon declares in its mission statement that “We create the world’s best indoor climate for people and environment.” The company’s stated aim is to provide multifunctional solutions which can be customised to the needs of their clients and which are easy to install and user friendly while also contributing to the well-being of the planet. Swegon reaffirm this commitment to doing its part to help the environment by saying ”

Our aim is to be better and leaner, and to generate minimum environmental impact”.

Swegon have participated in numerous projects worldwide,  providing indoor climate solutions for many different types of structures ranging from office buildings to factories, hotels to hospitals and laboratories to commercial premises. Some of the more notable projects have included supplying more than 180 air handling units to 30 St Mary Axe in London, perhaps better known as the Gherkin, the first environmentally sustainable skyscraper in London and also installing chilled beams in the undergraduate teaching labs at the world-famous John Hopkins University in Baltimore, USA. Other key projects include work on the Charles de Gaulle memorial in France, the “Glass Factory” at Volkswagen’s headquarters in Dresden and projects supplying modular air handling units to the Copenhagen Opera house and supply and extract air diffusers to the Oslo Opera house.

Swegon manufactures and develops its products in the Swedish plants in Kvänum, Tomelila and Arvika. Another manufacturing plant is located in Kaarina in Finland and yet another in Cantarana di Cona, Italy. All of Swegon’s products have been certified by Eurovent.

The quality management systems as well as environmental management protocols used by SWEGON are in conformity with the industry standards SS-EN ISO 9001 and ISO 14001.

Swegon boast a large range of ventilation and air conditioning products and solutions. Here we will present a brief overview of the different types of products manufactured by Swegon while a more in-depth analysis of the various product ranges is available by clicking on the links.

The company’s air diffusers provide discrete, silent and aesthetically pleasing ventilation. Swegon’s air diffusers are draught-free and have been designed to blend in with their surroundings without attracting unwarranted attention.

Air handling units are appliances which enable consumers to enjoy clean and healthy air. The models proposed by the manufacturer are some of the most economical models in the market.

Swegon’s precision air conditioners are all blessed with high precision and sensitivity levels. 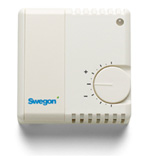 Swegon also propose several innovative climate control systems for use with their ventilation and variable air flow (VAV) products. This option allows users to choose a customized system which is tailored to their specific needs. The control equipment proposed by Swegon includes an electronic carbon dioxide and temperature sensor, an electronic occupancy detector, a room thermostat and a pattern controller for adjustable diffusers.

The manufacturer’s innovative solutions allow the ventilation, heating, cooling and domestic hot water (DHW) systems to be combined in one single unit. This multifunction system offers customers the possibility of enjoying a better indoor climate.

Swegon’s system products include the Tellus, which provides air handling, cooling, heating and hot tap water in one single unit, the Aqua Link, an advanced hydronic module,  the Nestor indoor climate management system, the Superwise control/supervision unit for use with Swegon’s Wise system and the TBRA remote access-communication device.

Customers have several solutions available to them in the search for better indoor comfort. Swegon supplies its customers with various waterborne climate systems such as comfort modules, chilled beams and climate beams, perimeter systems and radiant ceiling heating. Swegon boldly claim that their waterborne climate systems, which feature neither drainage nor fans, require minimal maintanence thereby making their systems even more attractive to customers.

Swegon in the UK

Swegon has a support service which customers can contact directly. The company also has approved technical stations for servicing equipment, preventive maintenance, training and spare parts.

Swegon asserts its presence internationally through its many representatives worldwide. These representatives are based in several European countries such as Hungary, Ukraine, Bulgaria, Portugal or Russia. Swegon also has other branches in Australia, South Africa, Kazakhstan, Taiwan and the United Arab Emirates.

Swegon, the European leader in the field of air conditioning, works in partnership with several agencies located all over the world. It has several European agencies such as Sweden, France, Denmark, Germany, Finland, Italy, Norway or the United Kingdom. The company is present in the North American market after establishing branches in Canada and the United States. The Asian continent is also catered for by its agencies in China. Swegon also works in partnership with its Australian branches.

GERMANY – Swegon have today announced that they have acquired bluMartin GmbH, an innovative manufacturer of decentralized residential air handling...

EUROPE – The Swegon Group today announced that they had become certified as an Endorser for EU Code of Conduct...

ITALY – Swegon have announced that, via their Italian subsidiary Blue Box, that they will unveil new products at the...

WORLD – Swegon have been using their Air Academy to inform consumers about the changes which can be expected under...

SWEDEN – The Swedish company Swegon today announced that all their air handling units are now compliant with Ecodesign Lot...

FRANCE – The last seminar of the Swegon Air Academy 2015, entitled a “forum for the objective transmission of knowledge”...

SWEDEN – The Swedish based company Swegon have announced that they are to release ProSilencer, their new software for sound...

WORLD – Swegon have released a guide to help customers understand the intricacies of Lot 6 of the European Ecodesign...

SWEDEN – Swegon have released the next generation of their system for demand-controlled ventilation. The company claim that large savings...

WORLD – Swegon have added the Parasol VAV to their Parasol family of climate modules. The company claim that the...

WORLD – Swegon have released their new Indigo reversible air/water heat pump which has been designed for use in demanding...

WORLD – Swegon have released a new and updated version of their Paragon waterborne climate module, which will be ready...

WORLD – Swegon have released the latest additions to their gold range of heat exchangers, chillers and heat pumps, all...

WORLD – Swegon have launched the new generation of their Paragon comfort module which has been designed to deliver as...

POLAND – A modern office building in Poznań called the Bałtyk Tower and designed by Dutch architects from MVRDV has...

WORLD – Swegon have released their new system software, ESBO, a powerful piece of software which helps calculate the capacity...

FRANCE – SWEGON is sponsoring a forum on energy and health in buildings November 21, 2014 in Clermont-Ferrand. The seminar...

WORLD – Swegon have launched their Falcon HF diffuser, a new high-flow diffuser for use in buildings with high ceilings...

WORLD – Swegon hope that their new RD series will provide its clients with both high levels of sound attenuation...

GERMANY – Swegon AB released a statement on 1st August 2014 announcing that they had reached an agreement to acquire...

GERMANY – Swegon continue to push on in their drive to strengthen their position in the German market by today...

P.Lemmens bought out by Swegon

BELGIUM – One of Belgium’s leading air handling unit manufacturers, P. Lemmens, has been acquired by Swegon as part of...

CANADA – Swegon AB has moved to acquire Vibro-Acoustics, one of the leading providers of Noise and Vibration control solutions...

FRANCE – The Interclima 2013 show was an opportunity for SWEGON to present company news. The beginning of 2013 was marked...

EUROPE – Swegon air conditioning leader with regulation reveals its revolutionary new product. This is the Gold E version, a system...

SWITZERLAND –the Swedish group Swedon AB has acquired the Swiss company RCS AG. It is a provider of cooling products and...