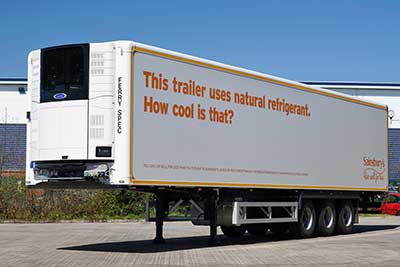 UK – The retail giant Sainsbury’s has become the first customer in the world to take delivery of Carrier Transicold’s prototype natural refrigerant trailer unit, which, the company claims, is a new generation of transport refrigeration system for trailers which operates exclusively with carbon dioxide refrigerant and which has a global warming potential (GWP) of just one.

The delivery is the first of three units set to join the Sainsbury fleet this year and is a key component in the company’s three-year technology field trial. The commissioning of the new natural refrigerant prototype marks the continuation of a process which looks to build on the success of a 2013 pilot, which saw the supermarket operate a modified road version of Carrier Transicold’s NaturaLINE refrigeration system for ocean containers – making it the first naturally refrigerated trailer operating anywhere in the world.

The new prototype system has been designed using advanced technology from the NaturaLINE refrigeration system, which has been assembled inside a traditional Carrier Vector unit chassis and powered by the same E-Drive all-electric technology as Carrier’s existing Vector range. The prototype is notable for using the natural CO2 refrigerant R744 in a closed-loop system.

David Appel, president, Carrier Transicold & Refrigeration Systems, announced the rolling out of the prototype, stating “Delivering the first dedicated natural refrigerant trailer prototype into service marks a huge milestone in the development of over-the-road refrigeration using CO2. Our ultimate vision is to see temperature-controlled units running on natural refrigerant in mainstream production. Today, with the support of one of our largest European customers, we are one step closer.”

The first of the three new prototype trailers to enter service with Sainsbury’s is a 13.6 metre dual-compartment tri-axle reefer, which was manufactured in the UK by Gray & Adams. A specialist team was brought in from Carrier Transicold in North America, working alongside technicians from Carrier Transicold North West in Liverpool, to install the unit.

Gary King, Sainsbury’s operations support manager, commented on the delivery of the prototype, declaring “We’re thrilled to be working closely with Carrier Transicold as they spearhead this innovation. The beauty of Carrier Transicold’s prototype trailer unit is it delivers a massive reduction in F-Gases by using natural refrigerant. This will directly help us achieve our ambitious environmental and sustainability goals, whilst delivering a seismic leap forward in terms of sustainability within the cold chain.” 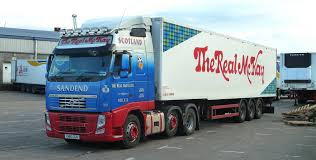 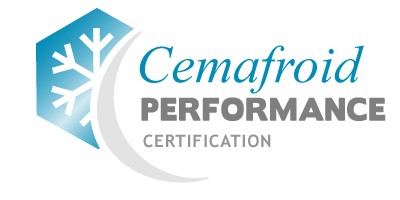