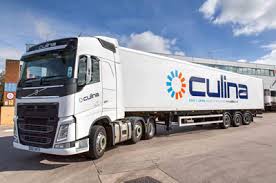 The new Carrier Transicold units will be mounted onto a mix of Montracon and Gray & Adams trailers, which includes ten 14.6 metre Longer Semi-Trailers (LSTs). The LSTs will form part of the UK Department for Transport’s (DfT) trial of longer articulated goods vehicles and should allow Culina to increase their load capacity and efficiency on selected routes.

The new trailers are to be used to deliver temperature-sensitive goods from food manufacturers to retailers, distribution outlets and regional distribution centres on a daily basis.

“Our fleet is on the road 365 days a year, so we’re focused on eliminating unexpected fleet downtime altogether,” stated Mark Matkin, Culina’s group fleet manager. “In the rare event that we do have a problem with one of our units, it’s paramount that we get it fixed and back on the road as soon as possible.

“The support offered by Carrier’s service partner network was one of the main reasons we chose Carrier Transicold,” continued Matkin. “Also key to securing this order was the proven performance of the Vector 1550 units.”

Each Vector 1550 unit has an efficient 1.5 litre diesel engine which uses Carrier’s E-Drive technology and an economiser in an effort to deliver a low total cost of ownership. Carrier claim that carbon dioxide emissions will be reduced by up to 39 per cent compared to conventional systems – this equates to removing 5.8 tonnes of CO2 per unit per year – while also delivering a balanced capacity of 14,700 watts.

The Transicold units can be integrated with Culina’s fleet telematics solution, which thereby enables customers to access temperature-critical information at any point in the journey.